“My freshman year I tried out for the D3 team, I walked on, I made it,” Van Duyne said.

However, wanting a change of speed and with some advice from former teammates, he found his way to OFC.

“I joined the club team because I had a few friends that were on the D3 team that also went there, said they loved it,” Van Duyne said.

Van Duyne, now leading the organization, has faced a whole host of obstacles.

“So at first, right before COVID, it definitely hit us different, because we were unaware of it,” Van Duyne said.

Despite being blindsided by the pandemic, the president still manages to look on the bright side of things.

“…we have to pay for our own jerseys, but the players get to keep them so to me it’s a positive. A silver lining at the end of the day.”

Van Duyne can’t help but look back fondly on what the club team has meant to him.

“The connections I’ve made, the people I’ve met, it’s not stuff I’d trade in for the world, so I just want to keep on doing it, keep on having fun…”

The president and his team now have their sights set on reaching the regional tournament at the end of the season. 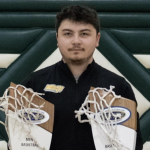