OSWEGO N.Y. —  Construction of a storage facility at the port, meant for the transport of pot-ash or salt, is now at a standstill after city officials took the Port Authority to court.

“Their whole attitude should have been one of picking up the phone and talking to us,” the Executive Director of the Port Authority, William Scriber said.

Now, Port Authority officials are trying to prove that the structure will help the city if completed.

“With this project, we’re putting a lot of money into this local economy,” Scriber said.

Scriber explained that the port runs as its own business, creating jobs, and opening opportunities for the local economy without the help of tax money. But Mayor Barlow said they are going about the project in the wrong way – upset that the structure will block the view of the iconic Oswego lighthouse coming into the city.

“What would really be the win is for the port to build what they originally proposed, that being the 55 foot dome..What you can do is completely skirt the entire review process,” Mayor Billy Barlow said.

What stands now is a roughly  68-70 foot tall square structure, something city officials said they never agreed on. But Scriber said the height difference won’t change that view of the lighthouse from the Marina.

“If you’re not changing the holding capacity, or position, It’s not a major change,” Scriber said. “It’s still going to block that view, which by the way, isn’t a historical registered view.”

But Fort Ontario on the other hand is a historical view of the lighthouse, and Scriber said that was the view that they worked through with the SHPO review – where the State Historic Preservation Office reviewed and eventually approved the initial proposal of the 55 foot dome.

“The view of the Fort is not in the least obstructed by the building,” Scriber added.

City residents are split, some feeling as though the structure isn’t a big deal, and others agreeing with the Mayor. Lee Chetney is a city resident who said the view of the lighthouse is going to be, ”forever changed.”

“You used to be able to come into the city, and ‘wow, I made it to Oswego, and look at how beautiful it is’ now they put that thing up and I hope they take it down because it’s just terrible,” city resident Lee Chetney said.

Despite the back and forth between city officials and the Port Authority, Scriber said he hopes to finish the construction after getting approval for the new structure in place. But Mayor Barlow said he doesn’t see this working in his favor.

“Typical port, they say one thing and do another,” Mayor Barlow said. 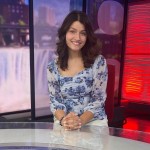