OSWEGO, N.Y. –  Professional jazz drummer Matt Wilson sat down with students of the Oswego State jazz ensemble to share some of his experiences from his successful career as a musician. Wilson is credited as a sideman on 250 CDs and the lead artist on nine albums. He stressed to students how important it is to play as a team.

“It gave them a sense of sharing and coming together. It started out like 8 people playing at the same time and hoping it was going to work. But then the team thing started to really come together sonic-ally and spiritually. It really started to come together,” Wilson said.

This event wouldn’t have been possible without Wilson’s relationship with the jazz ensemble director, Eric Schmitz. Schmitz met Wilson during his days as an undergraduate student at the University of Northern Iowa and recognizes how important it is for students to learn from active professionals.

“I think it’s important to get an idea of what active professionals are doing rather than just playing as students,” Schmitz said.

Wilson will join the jazz ensemble during their concert Thursday night at 7:30 p.m. in Waterman Theater. 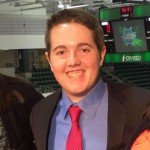